Word problems are challenging. In middle school and high school, word problems for proportional relationships and linear functions are particularly challenging. This post shows an visualization approach to unpacking the unit rate component of such word problems.

Below is an excerpt from a handout used to introduce such word problems. It starts with the unit rate and unit quantity provided. This is more accessible for students and allows for a visual representation. This allows students to “see” the multiplication and make a connection to the word problem.

This is followed by situations in which the unit quantity is unknown. Students still draw a visual, but use the 3 dot symbol for etc. to indicate the unknown quantity.

The same problems are used but students now write the symbolic representation. First they write the expression with both factors provided, then with the unknown. The “?” emphasizes there is an unknown quantity before writing the variable.

Here is a link to the handout. It is in WORD format to allow you to enter your own problems.

The concept of fractions as some number of equal parts begins in 1st grade per the Common Core (image below). There are students who struggle with the idea of equal parts and this could undermine student work in subsequent topics. The activity cited in this post is designed to develop the concept of equal parts.

The following images are from a Jamboard used as an introduction to equal parts activity (see photo at the end for access). The activity is chunked to incrementally present more of the ideas underlying equal parts. The use of the Jamboard can be viewed in a FB Reel and on YouTube.

First, the idea of equal is addressed by presenting a situation in which two students are sharing candy. Partitioning out pieces alludes to the set notation of fractions.

The idea of sharing equal amounts transition to sharing a single candy that can be broken into parts. The candy bar image is actually two images of parts. The a non equal sharing is used to unpack equal parts. This is continued for a circular shape and a triangular-ish shape.

There are additional slides to do more “mathy” work with equal parts. First, the students are asked to choose the shape that was cut into equal part (rectangle, circle, triangle). Then the students partition the shapes but with a dotted line as scaffolding.

Each shape can be connected to the food images from above. For example, the student may intuitively understand that a pizza is cut from the crust to the tip. I use pizza fractions to unpack the need for common denominators, which reinforces the significance of the concept of equal equal parts cited previously.

Here is an image of an accompanying worksheet. It draws upon the images from the Jamboard and follows the same sequence.

The image below shows how to make a copy of the Jamboard in order to use it. 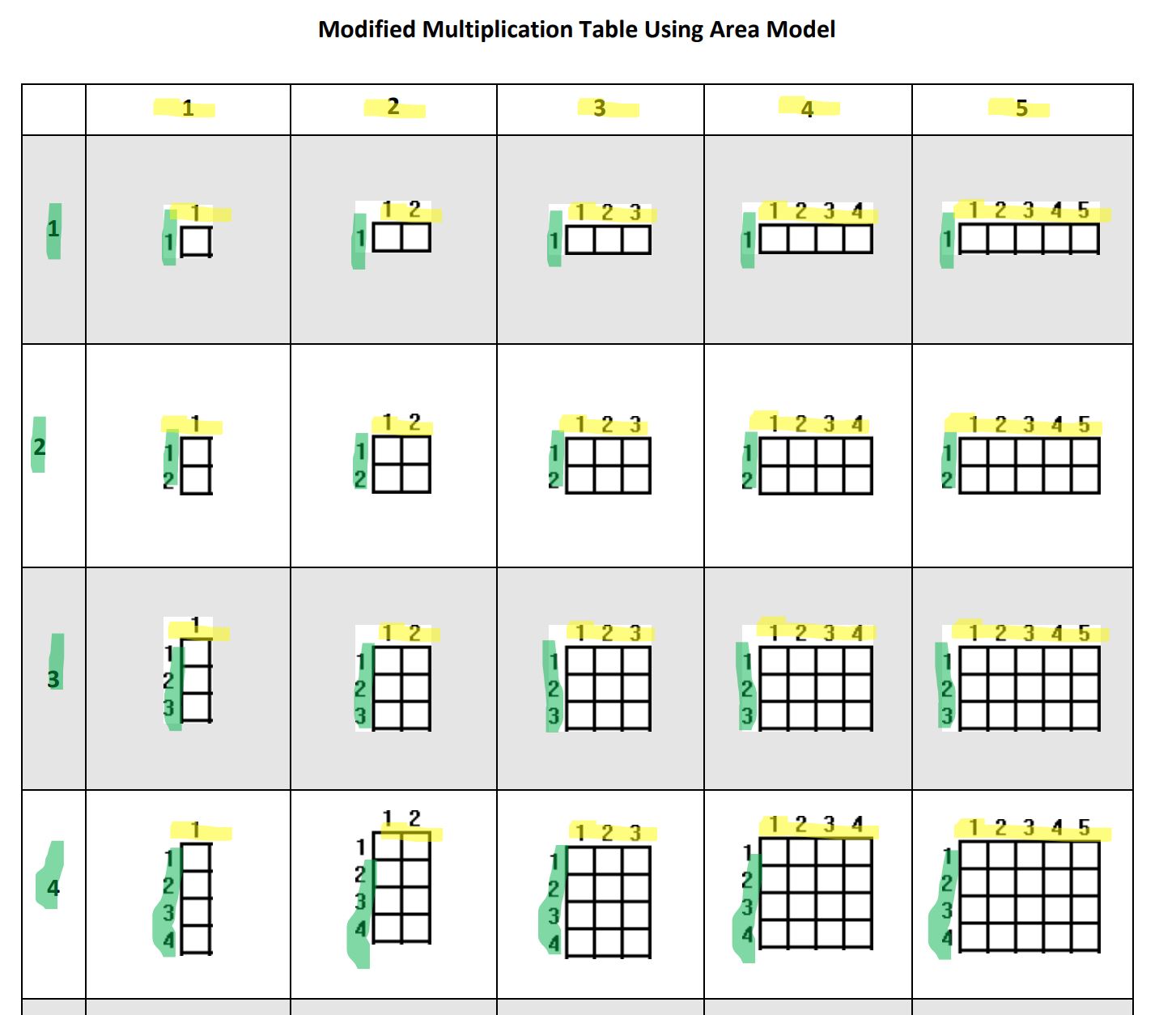 The idea is that the student will have to count squares and eventually skip count by how many rows. By doing so the student is more engaged (or less passive) in determining the product byy engaging the visual representation. I am interested in feedback and will revise if this could be useful.

Here is a link to the document. 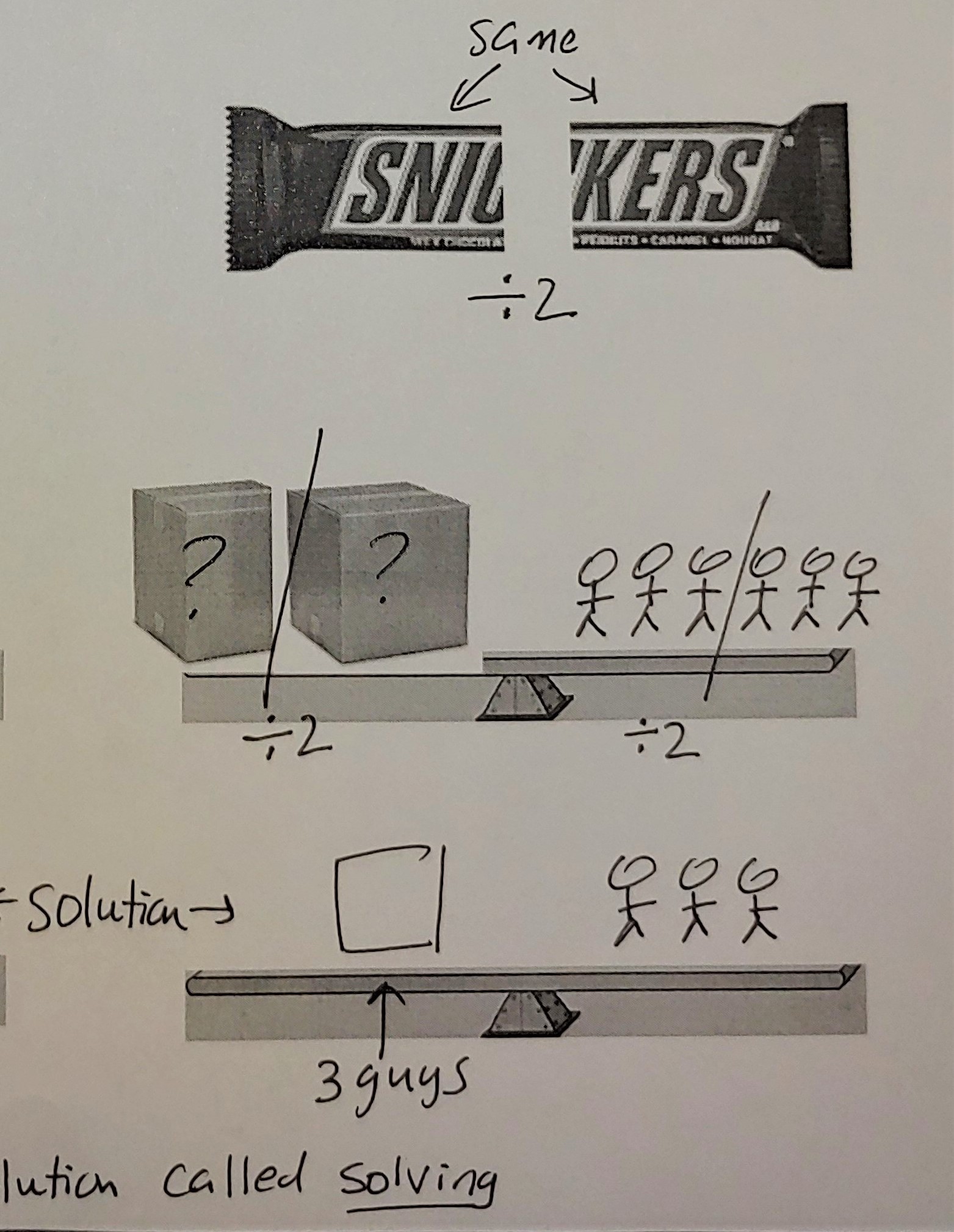 I introduce solving equations by building off of the visual presentation used to introduce equations. The two photos below show an example of handouts I use. Below these two photos I offer an explanation of how I use these handouts.

First I develop an understanding of a balanced equation vis-a-vis an unbalance equation using the seesaw representation.

I then explain that the same number of guys must be removed from both sides to keep the seesaw balanced.

I then apply the subtraction shown above to show how the box (containing an unknown number of guys) is isolated. I explain that the isolated box represents a solution and that getting the box by itself is called solving.

I use a scaffolded handout to flesh out the “mathy” steps. This would be followed by a regular worksheet.

I extend the solving method using division when there are multiple boxes. I introduce the division by explaining how dividing a Snickers bar results in 2 equal parts. When the boxes are divided I explain both boxes have the same number of guys.

The students are then provided a scaffolded handout followed by a regular worksheet.

There are 6 inches of snow on the ground. Snow is falling at a rate of 2 inches per hour. Write a linear equation showing total snow as a function of time (in hours). The equation would be y=2x + 6.

Often the word problems like this are presented on a sheet of paper in isolation as an attempt to make the math relevant and to develop conceptual understanding. For students who have trouble with conceptual understanding, words on paper are likely too abstract or symbolic to allow applications like the one above to be meaningful.

The real life application is useful if presented more effectively. Here’s an approach to use the same scenario but in a more relevant and meaningful presentation. The photo above shows the current amount of snow – call it 6 inches. Students can be shown the photo to allow for a discussion about accumulation and for their estimates of the amount of snow shown. The photo below shows an excerpt from a storm warning. Showing this warning and a snow fall video can allow for a discussion about rate of snow fall and the purpose for storm warnings. Combined, this approach can lead into the above word problem.

Once the application is presented students can be asked to compute snow levels after 1 hour, 2 hours etc. Then they can be asked to determine how long it would take for the accumulation to reach 18 inches (the prediction for the day this post was composed). After computing the answers WITHOUT the equation the students can be shown how to use the equation – the “mathy way.”