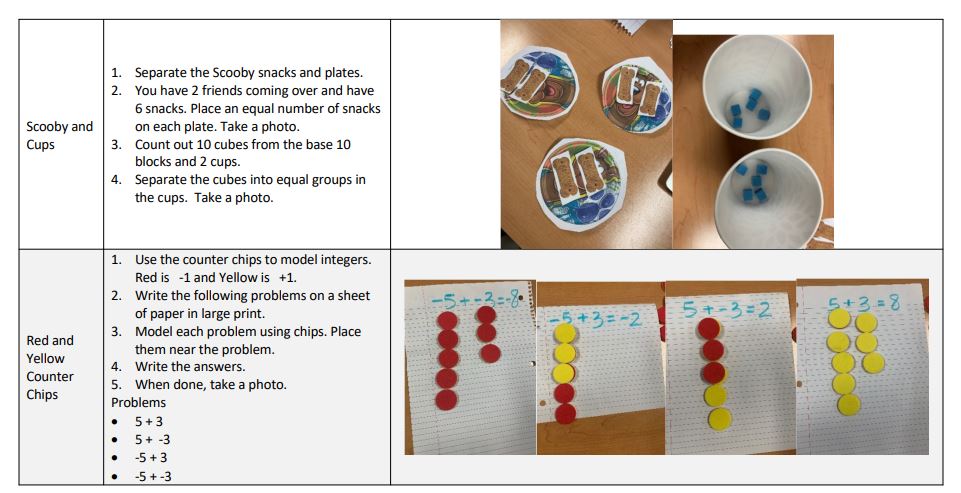 I teach a math methods class for special education teacher candidates at UCONN. During a lesson on an instructional strategy on making math meaningful, I experienced an epiphany of sorts. The students were partaking in a discovery lesson in which they rotated through using four different types of manipulatives (photo below, left). They would follow directions, take photos to document their work, and then the class would rotate to the next manipulative. Two were intuitive and easy to follow, one less so, and the integer chips (red and yellow below) were foreign to several students. This mirrored the energy and attention given to a computer based discovery lesson involving matching that I also conducted. Sandwiched in between was use of my beloved PowerPoint slides (below right) in which I shared key points about meaning making. At the start I shared that I would present for less than 10 minutes, which apparently was still too long for several of them.

My point is not to be critical but to share how I am stepping back to reflect on how this anecdote reflects a broader issue. Social media, not technology in general, appears to be changing how humans learn as the formative years of the younger generations are immersed in social media.

We all know at a visceral level from our Pandemic experience that the technology itself is not nearly enough to grasp the focus of our students at a level that intellectually engages them, as opposed to engaging them with activity that is often conflated with meaningful learning. (Most of us have experienced the phenomena of an activity that the students were actively completing but at the end did not appear to learn much.)

It occurs to me that the act of learning has profoundly changed because students have all the information in the world at their fingertips (article above lightly speaks to the depth of this). They learn about each other including what they had for breakfast or what they saw at the mall. They inform and teach each other about common interests and have a broader exposure to new ideas and interests. The article cited below speaks to “learning procedure…not restricted by time and space.” That statement alone speaks to how profoundly the younger generations learn and how they view the act of leaning.

I read a comment in a teacher Facebook group posted by a college instructor who was bemoaning the engagement and effort of his math classes. This led to a broader discussion about technology as a means of engaging the students. To me it appears to be #morethantechnology and I would like to learn from others about this topic.

NOTE: I don’t believe having students exchange Tweets and Snaps about curriculum topics is enough. People share and consume information in an on demand setting, including us older folks in our ancient Facebook groups and listservs. I think we have to make the information more engaging in a substantive fashion…but how?!