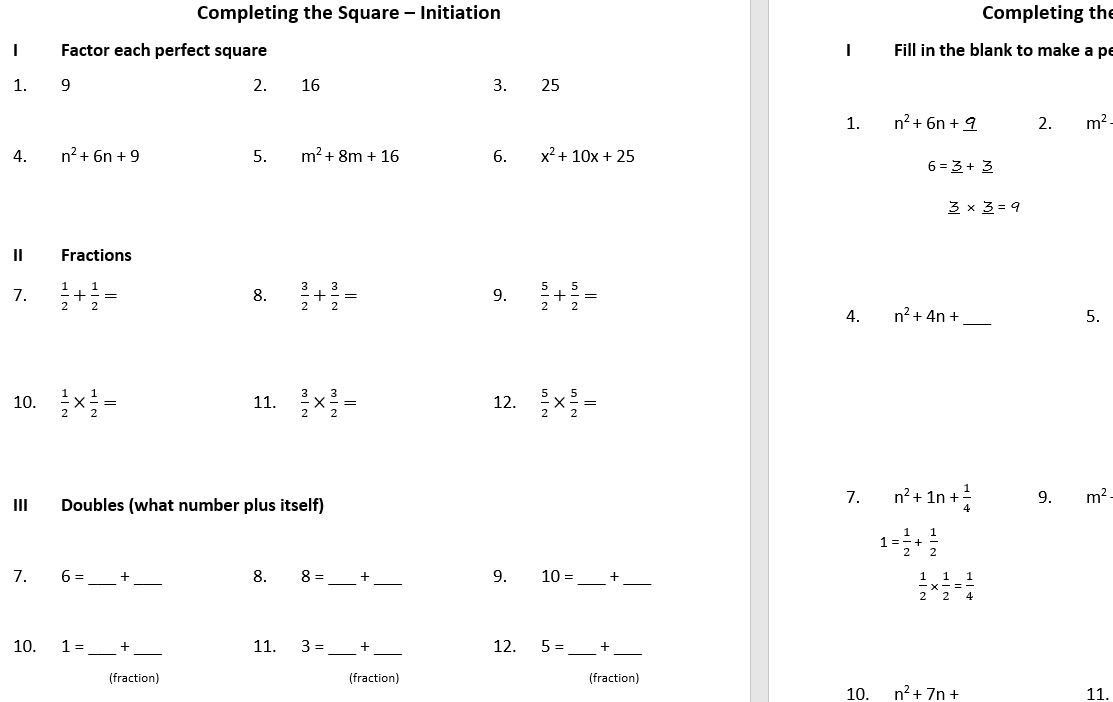 This post provides a handout that guides students through the various steps for completing the square to transform an equation into vertex form. Students are guided through each step in isolation.

Students are presented each step in a separate chunk of the lesson. Then the steps are chained together, with scaffolding that is faded. This is a different approach than presented in a previous post. The chunks, examples, and scaffolding help make students more independent in completing the work. This frees up the teacher to provide more 1 on 1 support.

Chunks of the Lesson

The initiation addresses prerequisite skills: factoring, perfect squares, fractions, and doubles. In lieu of having students divide by 2, I focus on identifying fractions that add to the linear coefficient as you will see in the second page.

To introduce completing the square, I recommend a visual activity like this one from Desmos.

The students identify the constant that results in a perfect square. They do so by identifying doubles that result in the linear coefficient (e.g., 6 = 3 + 3). The examples help guide them through this process. This section could be presented after a hands on activity on

Students are then tasked with factoring perfect squares in isolation, including those with fractions. The doubles are modeled for whole numbers first, generalized to fractions.

The last section chains all the steps together, first with scaffolding then without. Additional practice would be generated with other handouts that have problems in isolation. 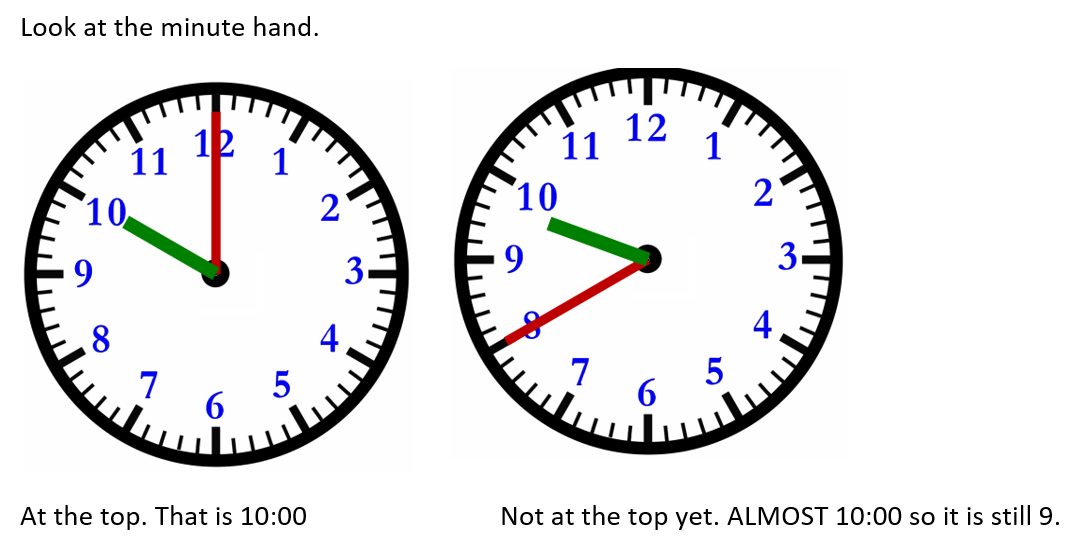 Here is an entry point for telling time in the 2nd half hour, when the hour hand appears to closer to the next hour. The clocks below contrast what 10 and a time getting closer to 10. This allows a focus on the minute hand. We can contrast the minute hand showing 10:00 vs getting close to 10:00. This is the first chunk in a sequence of mini-lessons.

Practice with Time in 2nd Half Hour

Math-aids.com website provides choices for the times situations you want to create for a handout. In the image below, the clocks all have time in the 2nd half hour (with 5 minute increments). This can be used as follow up practice to the instruction shown above. Have the student do the following: 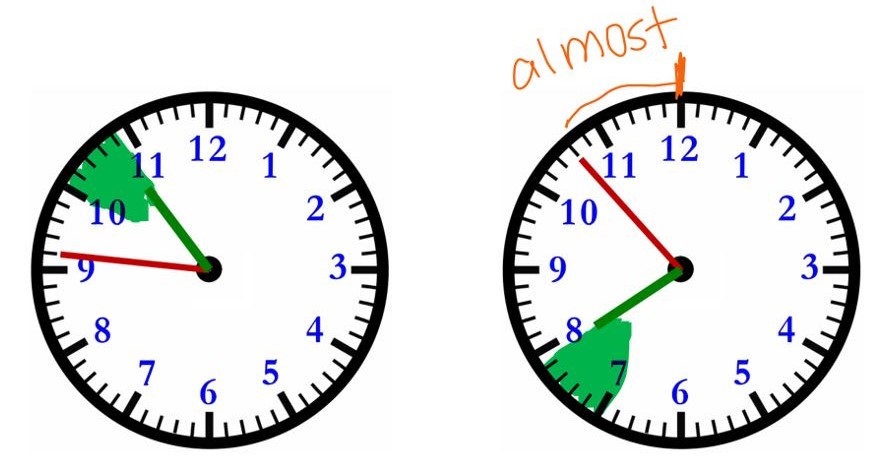 Telling time on an analog clock is challenging for many students, especially some with special needs. I worked with a middle school student with a disability one summer and after a few lessons he scored 100% over two days on telling time. Below shows the progression I used with him. I used a task analysis approach of breaking the task into smaller steps and chunking the steps to introduce an additional task demand incrementally.

I use math-aids.com worksheets for time and for many topics because it provides dynamic worksheets in which users can choose features. This helps to enable implementation of a task analysis and chunking approach.

The first chunk is whole hour time, which is an option on math-aids. The clocks produced by have color coded hands, with green for hours and red for minutes. I use use additional color coding through highlighters because the handouts are likely printed in B&W and because it engages students kinesthetically.

The second chunk is time with minutes under 5 minutes. Math-aids allows a user to choose specific times and will create clocks with those times. To provide a visual aid, students can write out the numbers on the handout or they can be printed or handwritten on the master copy. You can snip out the clocks shown, paste into a WORD document and then add the numbers. Note: I do not jump to half hours and quarter hours until last. I want students to focus on hours and minutes. This is analogous to counting money. I don’t introduce cents after talking about half a dollar.

The next chunk is time with minutes between 6 and 10 minutes. This is how I introduce the 5 minute mark and have them count on from 5 (see the 5 in the middle bottom). This leads to all the tic marks for 5s.

The 5s are the entry point to navigating the entire clock. I introduce the tic marks for 5s without the numbers for the hours. Students can be prompted to draw in red minute hands for a given numbers of minutes in 5s. If you want to make a handout for this, save the image below and crop.

Then students are asked to tell time by identifying the fives and then counting on (as they did with time with minutes under 10). Here are some options.

Time with the minute hand on the left side is tricky because the hour hand is close to the subsequent hour. The aforementioned shading can help. I also find it useful to have the student notice that the hour hand is not at the 12 yet, but almost. You can have students draw the marking and word as I did below.

Finally, there is a need to generalize. You can print images of clocks from a Google Images search into a handout and use the same strategies from above. This would be followed by actual clocks. 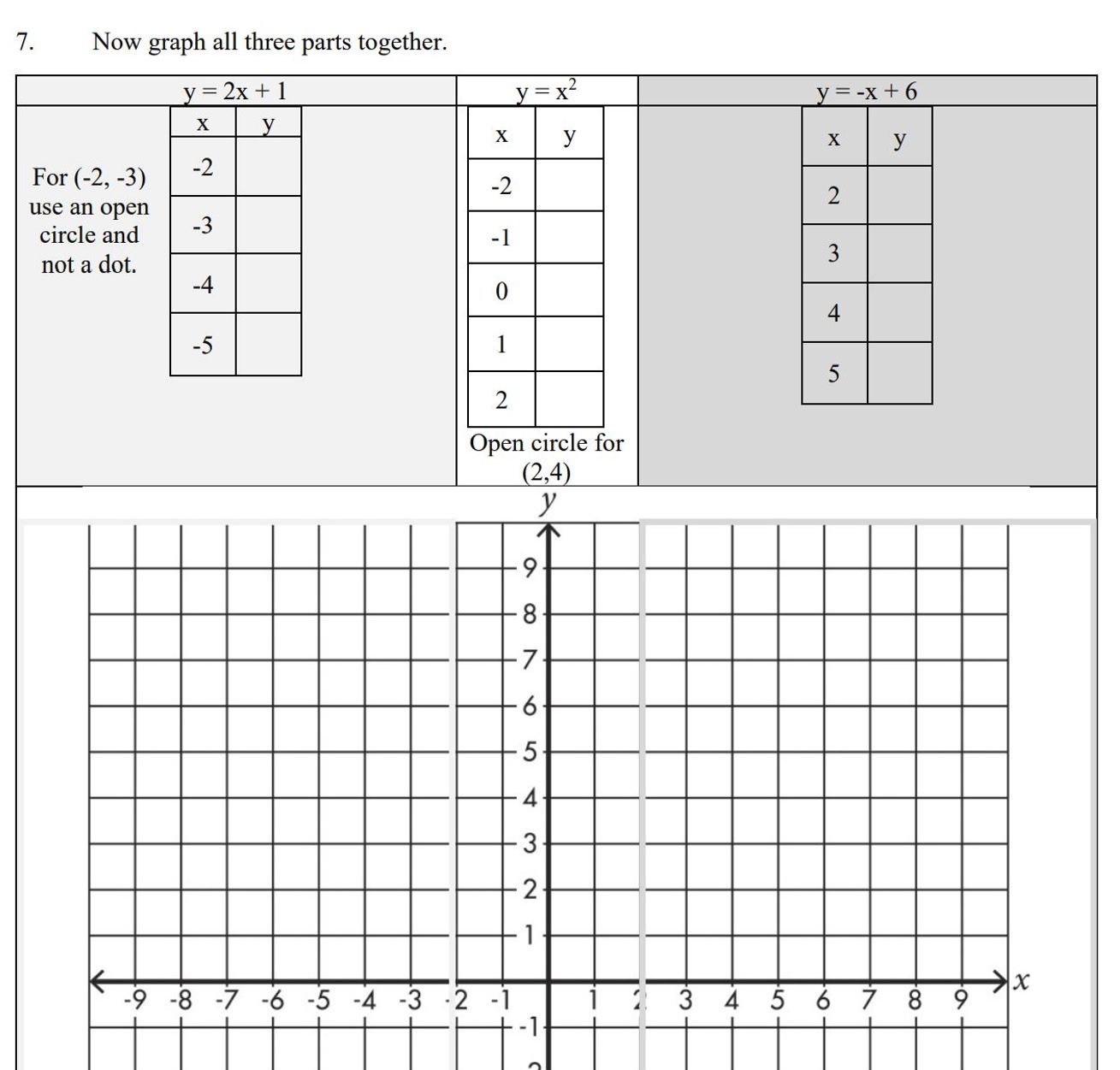 Here are images from a handout that serves as an introduction to piecewise functions. The focus is to develop conceptual understanding of piecewise before attempting to graph independently. The work is divided into chunks to reduce the level of task demand at a given time in the process.

The first section has an application and introduces the idea of pieces addressed together. The graph is discrete which allows the students to see the points in lieu of looking at lines.

Pages 2 and 3 provide scaffolding for graphing. Page 2 presents the sections separately. Page 3 pulls them together, but with the intervals physically separated into columns over the graph.

Finally, the students are introduced to the function notation, with additional scaffolding. They are also asked to identify y-values for given x-values in function notation to help connect x-values with different pieces. 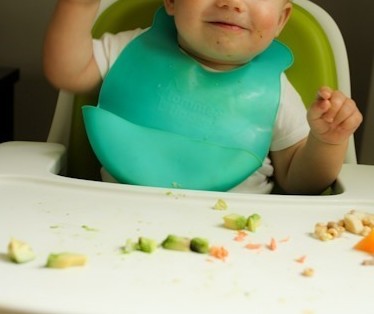 When I train new math and special education teachers I explain that teaching math should be like feeding a hot dog to a baby in a high chair. Cut up the hot dog into bite-sized pieces. The baby will still consumer the entire hot dog. Same with math. Our students can consume the entire math topic being presented but in smaller chunks.

My approach to doing this is through a task analysis. This is very similar to chunking. It is a method to cut up the math into bite-sized pieces just as we would break up a common task for students with special needs.

While waiting for my coffee order at a Burger King I saw on the wall a different version of a task analysis. It was a step by step set of directions using photos on how to pour a soft cream ice-cream cone. I thought it was amazing that Burger King can do such a good job training its employees by breaking the task down yet in education we often fall short in terms of breaking a math topic down.

The graph shown involves derivatives – a calculus level topic. Before getting into this heavier mathy stuff, consider the title of this post and the other content presented on this blog. Making math accessible to all students is not a special ed or a low level math thing. It is a learning thing. This artifact is what I drew to explain the math concept to a student in calculus to help her grasp the concept as well as the steps. The following are strategies used.

I find that when I provide intervention, this approach especially by addressing conceptual understanding is effective as the students respond well.

Chunky peanut butter means you there are pieces or chunks of peanuts. The peanut butter is broken into distinct parts. Chunking in teaching means breaking a concept or lesson into distinct, smaller parts. This makes it easier for students to process the lesson and the concept. They focus on less content at one time which is important given that working memory has a limited capacity, especially for many students with disabilities.

In the photo below the teacher is presenting a conceptual piece as a chunk of her lesson before she gets to the steps listed above.  She has drawn a triangle to represent going downhill, another going uphill and a horizontal line segment representing no hill. The rise and run are listed for each (the horizontal line segment has no rise). The students wrote a rise over run ratio showing the slope for each then practiced this before the teacher moved onto to the steps listed above.

Upon completion of this chunk the teacher can give a practice or pop quiz to help students fill in the gaps individual students may have before moving on to the next chunk.

The next chunk would not yet involve the formula. A slope triangle would be drawn under the line to visually represent the rise and run. Students would practice finding slope using this approach with the next step bringing in ordered pairs and the formula listed above.