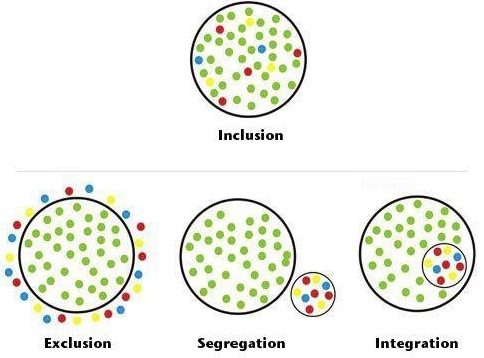 Some educators and parents of students with special needs are unclear about what is meant by the term inclusion. Some think it is having the student with a disability in the same location as “nondisabled peers.” Some think it involves doing the same exact tasks or academic work.

Sesame Street figured this question out years ago. The girl in the red shirt in the video below (video set to start with her) was experiencing inclusion, not because she was next to the other kids. She was not jumping rope but was most certainly included and appeared to love it! (Note: “inclusion” is not defined in IDEA, so formally this issue would be one of least restrictive environment.)

Below is a genius representation of inclusion (not my idea).

It appears that inclusion is sometimes viewed as a dichotomous choice. For example, I observed the student in a school who was the most severely impacted by a disability sitting in a grade level history class during a lesson communism. This was an effort to provide inclusion but was he was experiencing proximity.

Below is an example of inclusion for a student with autism in an algebra 1 class. Below left is a typical math problem. To the right is one I created for the student with autism. It was designed to help him understand the concept of matching inputs and outputs without using a lot of the math terminology. In his case, the focus in math was on concepts.