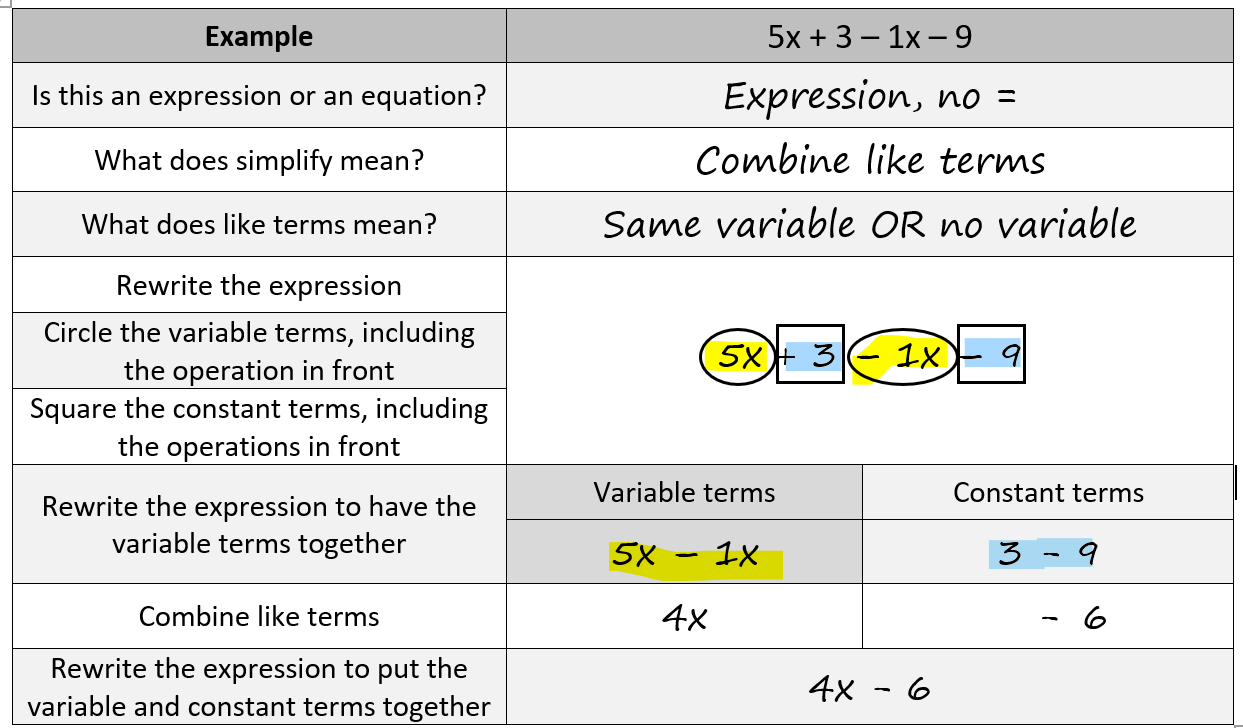 I have found simplying expressions to be one of the most challenging Algebra 1 topics. This post shows a scaffolded handout approach to simplifying.

The scaffolded handout focuses attention on the problem being an expression and on unpacking what simplifying and like terms mean. This is followed by a sequence of steps to address each mental and written step. 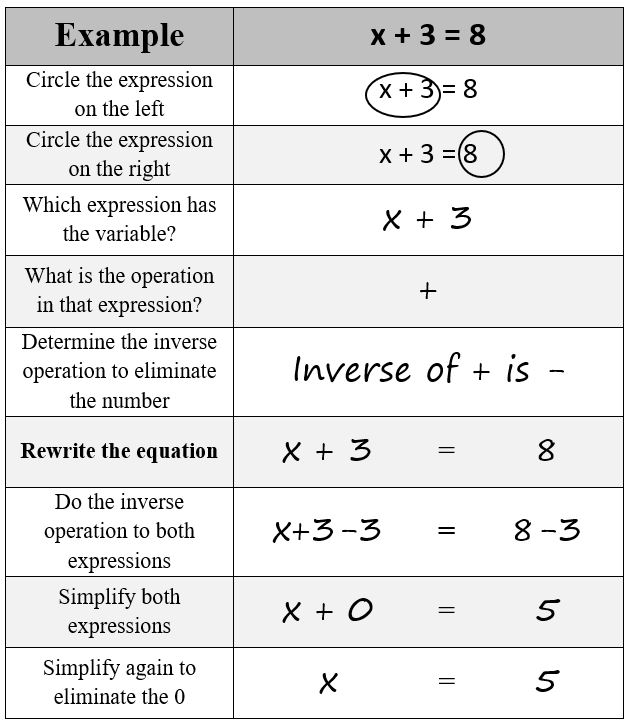 Students start work on solving equations in 6th grade. They work on it in 7th and 8th and into algebra classes in high school and college. Despite this, many struggle at all levels with solving. I have witnessed and heard about this at each level. This post addresses one possible reason, which is the students are not grasping the concepts. This may be due to the way equations are presented. This post unpacks the possible reason and presents a scaffolded handout to unpack the concepts and vocabulary.

The image below shows a earlier scaffolded handout I had used for years. It includes two elements that in my experience are common: referring to the “sides” of the equation, and the vertical orientation of the step with inverses.

I think these are “add-ons” that we teachers incorporate into math. I assume there are advantages and disadvantages for each. In this case, the disadvantages as I see them are a follows.

Explanation of the Handout

I am attempting to wean myself off of the use of add-ons. This handout The handout scaffolds both mental steps and written steps. In addition to the skill based steps, they focus on concepts and vocabulary. Here is a YouTube video showing how it works, shown on a Jamboard accessible using this link. (You have to make a copy to access it.)

The second sheet has blank templates. One possibility is that you could assign students problems and they can complete the first 4 on here. 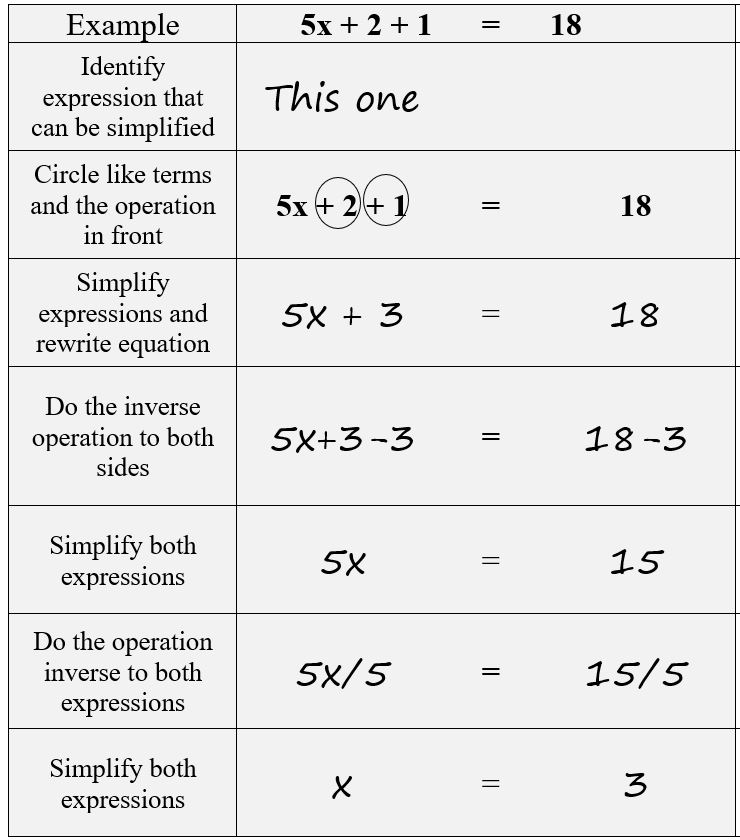 Many students struggle with solving equations. Many struggle with simplifying expressions. Putting these together becomes an algebraic version or Orthrus (brother to the more famous 3-headed dog, Cerberus). This post shares a scaffolded handout to guide students through the process while making sense of each step.

The first two are mental steps. By addressing them explicitly with students providing a written evidence of their thinking, the mental steps can be observed and assessed. The operations are circle to be proactive in addressing common misconceptions. This can invoke a discussion on the meaning of the operations negative and subtraction. Once the expression is simplified, prior knowledge of 2-step equations kicks in. Here is a link to a previous handout. 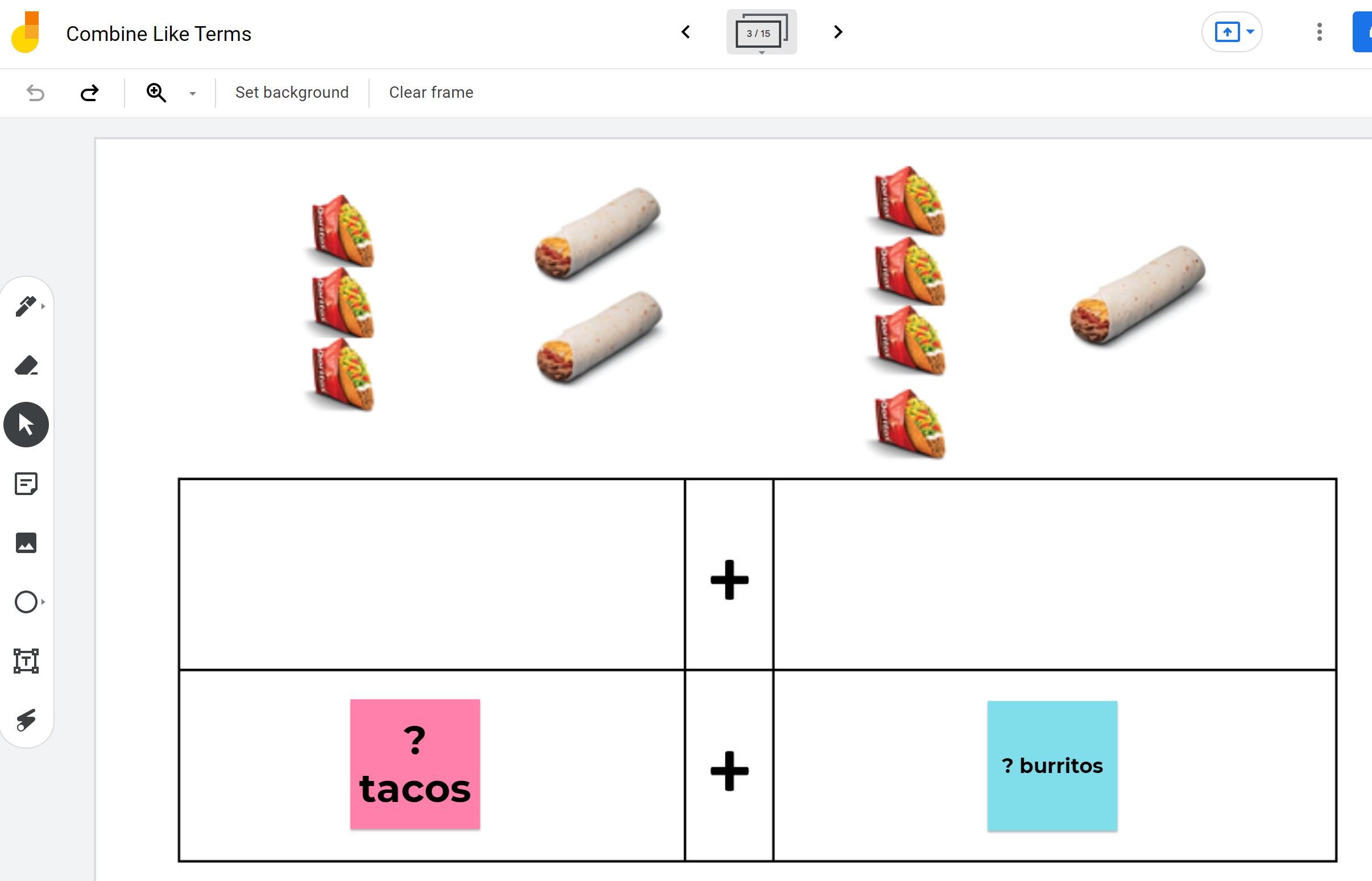 Here is a Jamboard (see photo at very bottom for how to make a copy to edit) that presents like terms as visual manipulatives and then eases into the symbolic form – the “mathy” stuff. The following shows each slide as is and how it looks after completion.

Start with two groups of common items, pull them together because they are alike, and compute the total. This slide is designed to introduce the students to how the manipulatives work for this Jamboard and to introduce them to the concept of like terms.

This slide introduces different types of terms at a conceptual level and how they are rearranged into like groups. It also introduces the use of a binary operation between the two groups of terms (vs adding everything together as the students are wont to do). This slide also establishes color coding by like terms, which is useful for when the work shifts from concrete form (manipulatives) to abstract form (written symbols).

This is the mathy version of grouping by like terms. This slide is crucial as it presents the Associate Property with the binary operation symbols acting for a moment as unary operations. In other words, the addition symbol follows the 2b, the 4t, and the 1b before latching on to another term. It is easier to address this while all operations are addition. Present the original problem as an algebraic expression and not individual pieces “3t plus 2b plus 4t plus 1b”. NOTE: I keep the coefficient of 1 to reduce task demand – one less thing to think about. I address the implied coefficient of 1 after students have had ample exposure to like terms.

The use of 1 dollar bills is intended to introduce constants. I fluctuate between whether to write the terms for the bills with or without units (4 dollars vs 4).

At this point, I suggest giving students independent practice with expressions that have addition only before moving on to the following slide.

This slides shows how I introduce subtraction and negative terms. The image shows a woman eating a taco, hence it cancels one of the tacos.

I present the eating 1 taco image as a negative, with the terms separated as opposed to being an expression. This allows the students to see the “-” symbol as a unary operations (negative) and then as a binary operations (subtraction). In other words, they see the symbol “attached” to the term. It is a prelude to the use of the Associative Property with subtraction.

The new image is of a person eating a burrito. The slide introduces the concept of the negative term in the Associate Property.

**The students are now presented with the what is likely the most challenging aspect combining like terms, which is the “-” fluctuating between being a unary and binary operation. The original problem is again presented as an algebraic expression, “2b minus 2t plus 4t minus 1b”. The minus 2t is converted into negative 2t while the minus 1b is converted temporarily converted into negative 1b as it is moved, but then is converted back into minus 1b. This is the opportunity to unpack this situation. You redo the problem with the 4t minus 2t and negative 1b + 2b (and add the plus symbol) as part of the discussion. You can also duplicate this slide and revise into different problem.**

The next two slides have the color and the “?” sticky note faded. They can duplicate an existing sticky note to record the final answer (or you can add in the “?”).

Finally, students are presented static algebraic expressions. I return to color coding as this is a support they can take with them to handouts. Eventually, the color is faded on the handouts, but they can still use shapes to indicate the different types of terms.

Copy the Jamboard and to edit and use it.